I Am A Bonehead.

by Bruce Turkel | Oct 6, 2020 | Advertising, All About Them, Branding, Branding Yourself, Building Brand Value, Is That All There Is, Together with Turkel, Uncategorized 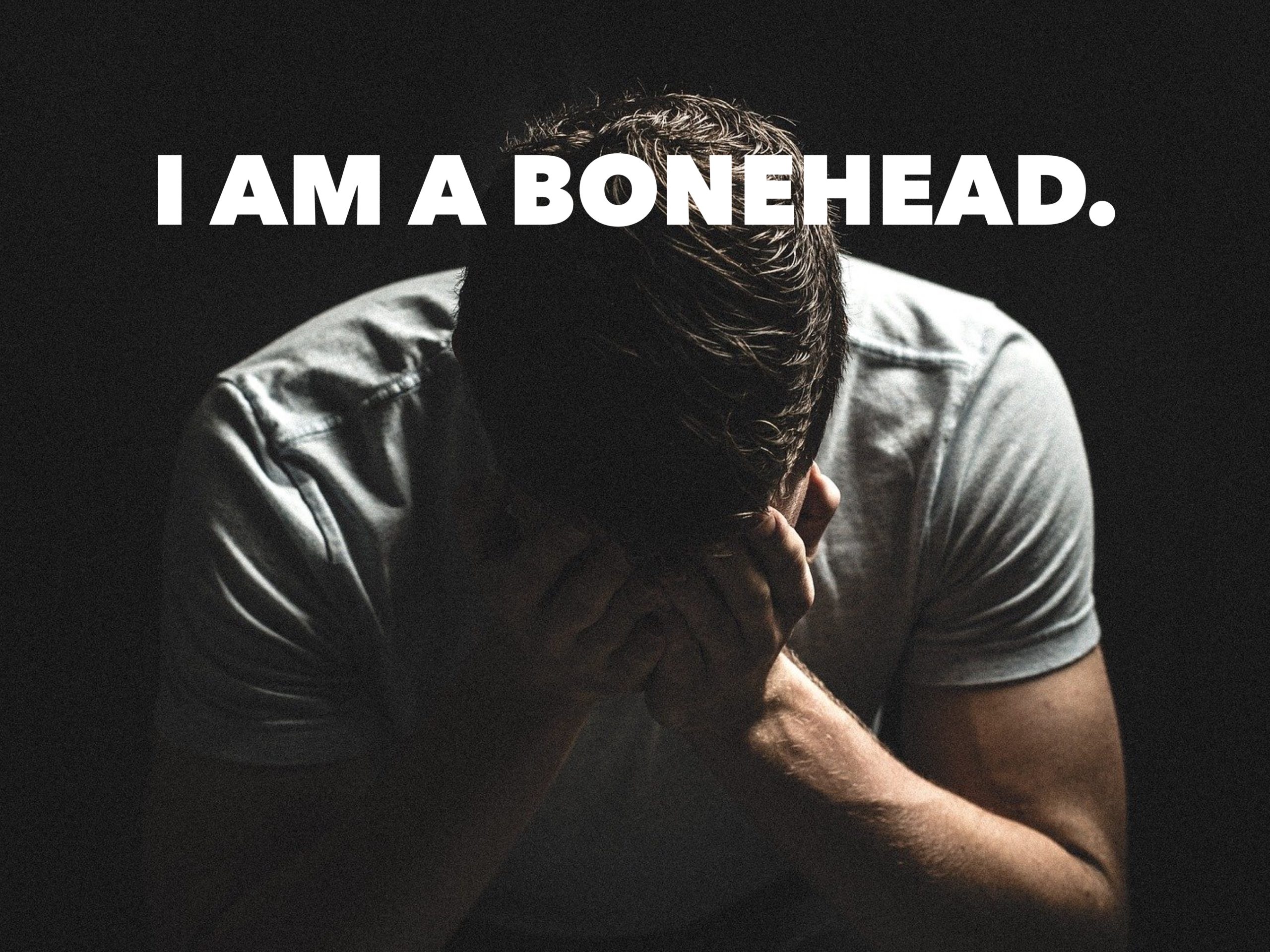 Years ago a good friend of mine was invited to speak at one of those big motivational speaker events. You know the kind – the ones that advertise celebrity speakers such as George W. Bush, Mr. T, and some famous Southern college football coach. They set the admission price really low to fill the venue and then make their money on the sales of the speakers’ 12-step programs, workbooks, coaching, and the like.

As my friend got ready to walk out onto the stage from behind the curtain, the producer asked him what close he was going to use.

Not being familiar with industry lingo, my friend heard “what clothes are you going to use?” and said he was going to wear what he had on.

“No, no, no,” the producer said over his yellow-stained cigarette stub. Are you going to use The Sharp Angle Close? The Artisan Close? The Puppy Dog Close? The Backwards Close…?”

“Wha…?” my friend mumbled, too nervous and distracted to respond properly. (He later told me he thought the producer was reciting Yoga poses). Without answering, my friend waited a second or two until he was introduced and then went out on stage and started his presentation.

He said his 12 minute pitch went fine until he started talking about the products he had for sale. That’s when he turned to gather all the CDs stacked on a stool behind him. When he turned back around to face the crowd, he didn’t realize the mic operator had lowered the boom. The heavy microphone hit my friend right between his eyes.

Stunned by pain and surprise, he dropped to his knees, dropping all of the CDs he had cradled in his arms. They started rolling around the stage in every direction. Some fell off the platform, some rolled behind the curtain, and some just circled him crazily until they lost energy and slowly rotated themselves down onto the wooden floor of the stage.

My friend just sat there crestfallen. He didn’t know what to do. After what seemed like an eternity, he dropped his head, threw up arms and said quietly, “I was going to offer you my training package for half of its regular twelve hundred dollar price but now you can have anything you want for only $200. Just see me in the lobby later… if you even want to…”

He found his glasses, wiped the blood from his nose, and picked up a few of his errant CDs before he slinked off the stage in disgrace.

When he got to the curtain the producer greeted him with open arms and a big smile. “Oh my lord,” the producer said excitedly, “that was the greatest Fallen Sparrow Close I have ever seen. You are a master salesman!”

I don’t have to tell you that once my friend got out to his sales booth in the lobby people were lined up and waiting for him. When the afternoon was over he had sold every single CD, tape, workbook, and program he had brought along. He even took money from people he promised to send more materials to.

Two days ago I sent a post to you asking simply “What’s the one thing that you’re most interested in improving in your business over the next 90 days?” Stupidly, I left an extra space between the carats and the words “first name” and so my database didn’t populate the salutation with your actual first name but rather addressed the post to < FIRST NAME >.

It was a bonehead rookie mistake and I definitely know better. And a bunch of my friends wrote helpful notes to point out my error to which I could only answer:

“Yeah, my bad. Nothing excusable I can even blame it on. I simply set the parameters wrong.

What can I say? Clearly I’m a better marketer and writer than direct mail algorithm programmer.

Still, you didn’t answer my question…”

But here’s the funny thing – that e-mail received more responses than almost anything else I’ve written and distributed in the 13 years I’ve been writing this blog.

As I’ve written in my soon to be released new book, Is That All There Is?, and as we will discuss in my upcoming Together with Turkel Strategic Roundtable, sometimes the most successful thing you can do is turn your liability into an asset. Or as I say in the book and in my blog, “Make Your Scar Your Star.”

The simple humanity of accepting and presenting our fallibility – whether planned or not – works in sales, it works in branding, and it works in life.