Is It The Beginning Of The End Or… 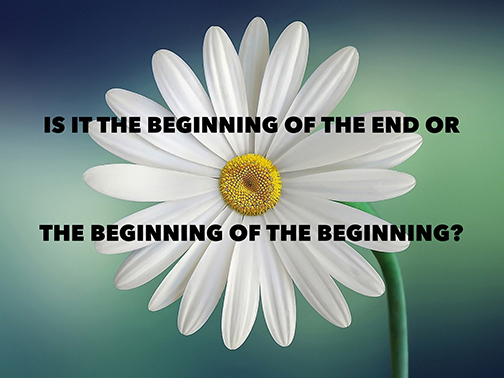 Last week (March 20, 2021) marked the first day of spring. And with it came all sorts of new beginnings, both real and metaphorical.

Public Health: According to The New York Times, “More than 564 million coronavirus vaccines have been administered worldwide, equal to 7.4 doses for every 100 people.” In the US alone, 29% of the population have received their first shot and 16% are fully vaxed.

Politics and World Affairs: The results of the US election means that America has both a new president and a new party controlling the Senate. This effects everything from how bills are enacted in the states to how foreign governments will behave moving forward.

Technology: AI, ubiquitous Internet distribution, blockchain, cybercurrencies, higher and higher transmission speeds, and more maturing technologies are about to change the world again, ushering in Web 3.0 and all of the new wonders it will bring.

The Economy: Besides all of the opportunities these new technologies will provide, a surging home market, stock market, and unprecedented pent-up demand will provide outlets for both the entrepreneurial energy and investment capital that’s been cooling its heels on the sidelines.

According to Scott Galloway in Business Insider:

“Post-crisis periods are among history’s most productive eras. London rebuilt after the Great Fire with grand new architecture, and Europe after the worst of its plagues underwent a commercial revolution. The Marshall Plan turned enemies into allies, fomenting peace and prosperity for over half a century. Leaders also emerge from crises. Ulysses S. Grant was a washed-up soldier without prospects until war broke out, but that war created the opportunity for Grant to save the Union and advance the cause of freedom.”

Now it’s very possible that you’re not feeling this wave of optimism yet. After all, a year of the boredom of sheltering-in-place, the sadness of losing loved ones, the despair of watching businesses evaporate, the frustration of watching hate-fueled politics, can knock the wind out of anyone. But perhaps that’s even more reason to approach the new season with renewed vigor and excitement for what’s about to come.

My friend and mentor, Susan Ford Collins and I have very different views of how the world works. Simply put, Susan is a “Universe will provide” person and I am not.

When I was interviewing Susan for my latest book, Is That All There Is?, I remember asking her how I would know when something I was trying out for the first time was on the right track.

“Watch out for the little explosions,” Susan said with a little twinkle in her eye. “That’s how you know the Universe is working on your behalf.”

“But I don’t believe in the Universe,” I’d say.

“That’s okay,” Susan answered, undetered by my skepticism. “The Universe doesn’t care whether you believe in it or not.”

I think it’s the same with the changes that are on our horizon. They’re coming our way whether we’re ready for them or not. Which means now is your best opportunity to search for certainty in uncertain times.

If you want to know how to do that, click HERE.