All Different Hobbies Are The Same.

by Bruce Turkel | Sep 28, 2020 | Branding, Branding Yourself, Bruce Turkel, Building Brand Value, Coronavirus, Is That All There Is | 6 comments 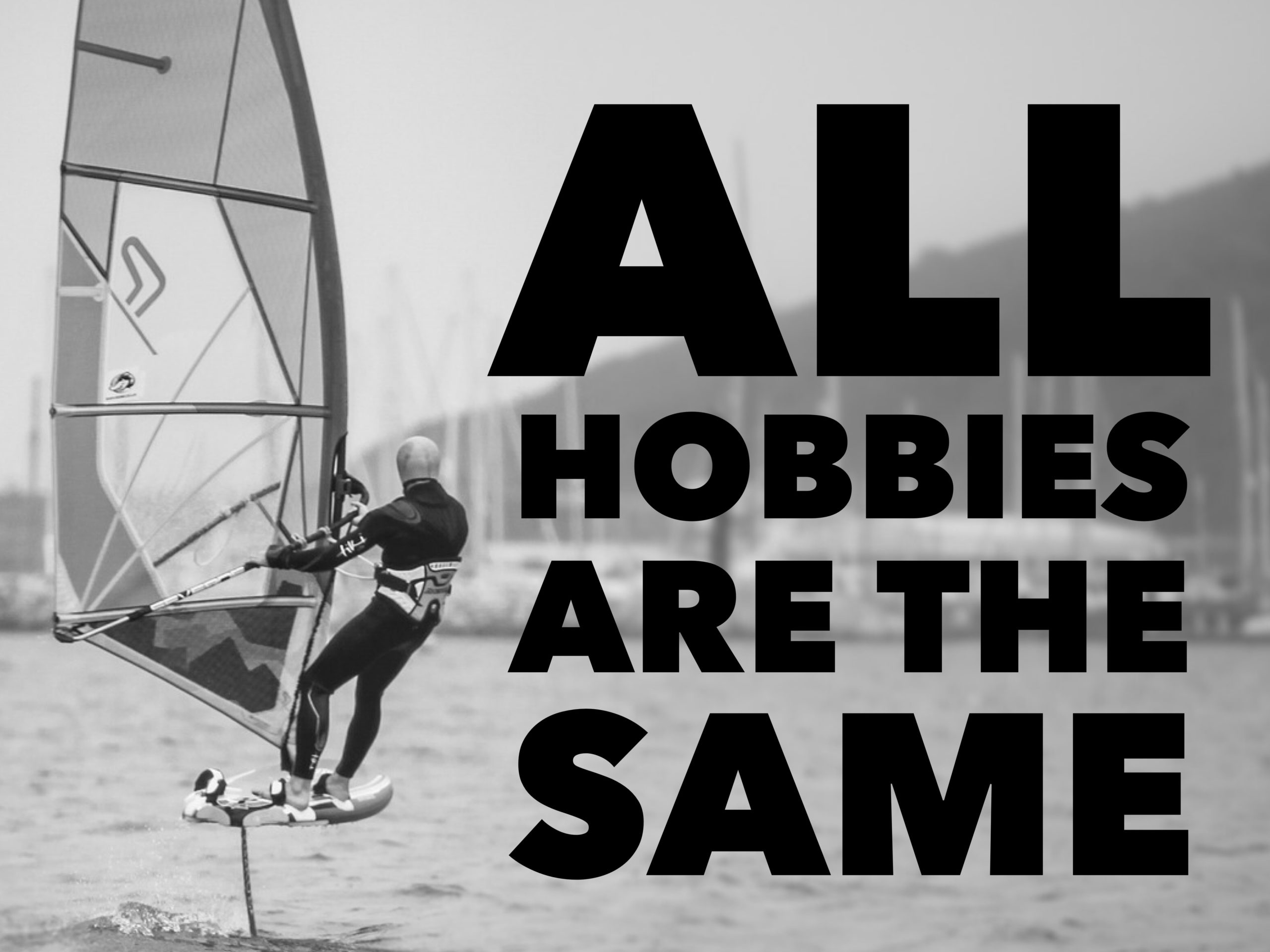 Friends invited us to join them for dinner at their sailing club the other night.

Thanks to Coronavirus, the restaurant isn’t open but they’re allowed to bring in food. So we were able to sit by the water and enjoy delicious take-out Thai food while we watched the boats and the pelicans and enjoyed some outdoor socially distant time together.

While we were eating, a few kids sailed their windsurfers to the boat ramp and hauled them out of the water. My friend Tom said that for his upcoming 62nd birthday he was going to take a hydrofoil sailboard lesson, his first time on one of those. He explained that at speed, the ski under the board lifts you up and out of the water, allowing you to go faster by reducing the amount of friction heated up between the bottom of the sailboard and the top of the water. He explained the attack angles, the importance of the ratio between the fin’s with and its depth, and the balance of sail size and sailor’s weight.

I had no idea what he was talking about but nodded along with interest.

His story over, Tom asked me what I had done over the weekend. I told him I had spent time figuring out how to play Jackson Browne’s Jamaica Say You Will on the guitar. The challenge, I said, was that Browne plays the song in the key of E and that’s much too high for me to sing. So I needed to transpose it to a key that better fit my voice and finally settled on C. Where it got interesting, I went on, was in the walkdown. That’s where the song transitioned from an A/Ab to an A/Gb to a Gbm to a Gbm7 before finally resolving on the tonic E chord. Of course I could figure out the progression of the notes (F/E, F/D, Dm, Dm7, C) but it took me a lot longer to figure out the fingering to make it work.

This time it was my friend had no idea what I was talking about. Chances are, you don’t either (unless you play guitar, of course).

Years ago my wife went with me to an auto crossing event. We wandered around the pits and I chatted with the other racers I had gotten to know in the year or so I had participated. During one particularly jargon-filled conversation, another auto crosser and I discussed tire inflation rates, RSR accessories, suspension settings, and the like. Of course, my wife had no idea what we were talking about and was a bit exasperated. In frustration she turned to the girlfriend of the auto crosser I was chatting with and asked if she’d understood a word the two of us had said.

“Not a thing,” the other woman answered. “But then again, I don’t speak Porscheguese.”

Coincidentally, the next day there was an orchid festival at Fairchild Tropical Gardens, and my wife—who loves gardening and orchids—asked if I’d join her.

The event was a huge celebration of the bright flowers. Hundreds of booths sold and displayed every strain of vanda, dendrobium, cattleya, and oncidium you can imagine, as well as lots of exotic varieties that you can’t. People in sandals and floppy hats walked in and out of the park with their arms full of potted plants, bags of special plant foods, and books on the proper care and feeding of orchids. But what I found most interesting were the conversations where orchid enthusiasts discussed their favorite flowers. They talked about “vulgar root structures,” “proper hydration and vitamin supplements,” and “optimal sunlight angles” with the exact same knowledge and fervor that my autocross buddies talked about “adhesive tire compounds,” “oil viscosity,” and “model designation variances.” The object of the flower lovers’ affections differed completely from that of the auto racers, but their emotional involvement was exactly the same. Both parties talked about their respective passions with the same intensity and ardor.

There’s an old saying that refers to religious fanatics, political zealots, and fundamentalists of any stripe: “You can’t logically talk someone out of something they didn’t logically talk themselves into.” It eloquently explains the conundrum of why facts don’t override faith.