Great Is The Enemy Of Good.

by Bruce Turkel | Jan 5, 2021 | All About Them, Branding Yourself, Is That All There Is, Leadership, Uncategorized | 11 comments 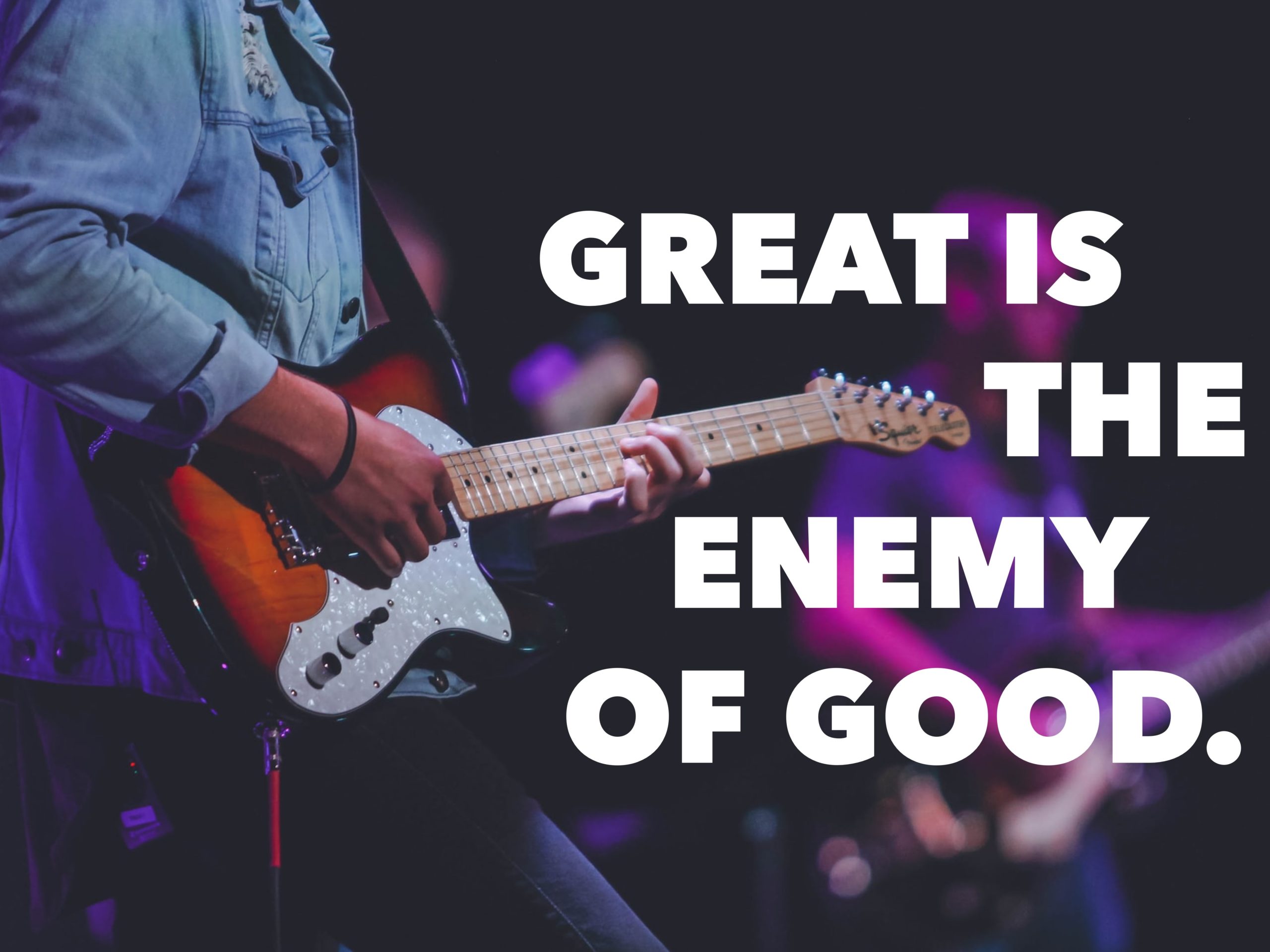 The fantastic lead singer and guitar player in our band was relocating to Atlanta. So after about 10 or so years gigging around Miami, our Saturday night show at the Titanic Bar would be our last time together. And at around 1:45 in the morning, the set we were playing would be our last together, too.

Knowing that, I asked our front man if we could play a favorite song of mine, Too Tall To Mambo, by the great New Orleans’ band The Nighthawks. We’d rehearsed it over and over but we had never yet played it in public.

“Not tonight” he said over his shoulder.

“Why not?” I whined.  “We practice it every time we rehearse together. We play it really well. It’s a great song. Why don’t you want to play it?”

“Fine” he said in a tone that made it crystal clear that it was not fine. “If you want us to play it so badly, you sing it.”

(A bit of backstory: I’ve played in bands for years. But I’ve always played wind instruments that go in my mouth. First trumpet and now harmonica. And there’s a good logical reason for that. After two throat surgeries I’m not such a good singer. So while his answer: “you sing it” might sound like a gracious invitation, it was actually a bit more of a threat.)

He called the song and our drummer tapped out the distinctive NOLA second line beat to get us started.

“Awwww Allen,” I croaked into the mic, “I love that crazy mambo beat you’re laying down there baby. C’mon everyone, laissez les bons temps rouler!”

The band came in right on cue and we were off.

“Who wants to be a rock star?”

The crowd roared their answer.

Everyone stood up and then I signaled the band to bring up the volume. We all sang the song together a few times and everyone in the crowd hooted and hollered along. It ended with us getting a huge standing ovation (yes, of course I know the audience was already standing – you’re probably thinking  I did that on purpose. I blush at the very suggestion).

Our guitar player wasn’t amused. He stopped chugging his beer just long enough to let me know how he felt.

“I want to be a successful professional musician. I work hard on my chord voicings and my microtones and no one ever pays any attention. You can’t even sing and you still had everyone up dancing and singing and they even gave us a standing ovation. It’s not right.”

My late great friend Bobby Ingram (who used to play with David Crosby, Jimmy Buffet, Jose Feliciano and many more) told me that if people wanted to hear  good music they’d stay home and listen to Leonard Bernstein conducting the New York Philharmonic perform Tchaikovsky. But when they go out to party, they want to have fun. They want to have a drink, they want to meet a pretty girl or a handsome guy, they want to enjoy themselves. As Bobby used to say, “If they go home and have sex then we did our job.”

Virtuosity is a talent I can admire and respect from afar yet never attain. But sometimes, being good enough is more than good enough, it’s exactly what your audience wants.

P.S. I’ve been thinking about something for quite a while and I just wanted to let you know about what I’m going to try.

I’ve decided to update my blog format. In a few weeks I’m going to begin offering my weekly blogs on video and text. For those who enjoy reading them, they’ll still be available in written format you’ve come to love. But now, if you prefer watching videos, you’ll be able to do that too.

After experimenting for a month or so, we’ll see where the dust settles. I’m going to let you guide me as I ALWAYS LOVE HEARING FROM YOU!

New year – fresh new changes.  Here’s to you having your best year ever, and in every way imaginable!