Have You Gotten Into Clubhouse Yet? 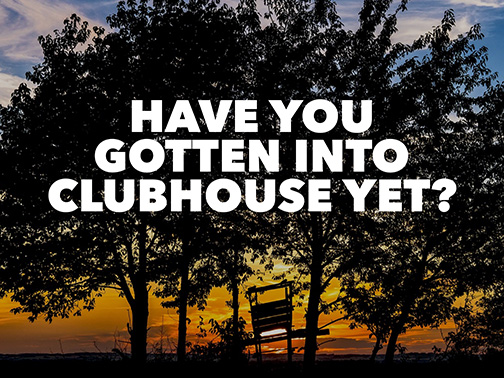 Eight years ago Paul Davison was scooping ice cream at SXSW. Today he is a cofounder in Clubhouse, the hottest social media service around.

Admit it, after Facebook, LinkedIn, Twitter, TikTok, and Instagram became ubiquitous you didn’t think there could be any room for another social media site, did you?

But did you know that after the app received a $12.5 million dollar investment from Andreessen Horowitz in May, it was valued at $100 million? And this even though Clubhouse didn’t have a public website when it started operating.

What’s more, it all started during a raging pandemic while most every other business around seemed to be sucking the wet mop.

Li Jin, founder of Atelier, a V.C. firm that invests in the influencer economy, credits Clubhouse’s success to a strategy that’s worked so well for another content-creator focused site you’re familiar with. “TikTok (has been successful) in large part by treating creators as first-class citizens and making them feel like they’re served for and cared for. I think that made investors realize serving creators was a good business strategy.”

According to The New York Times, Clubhouse has also learned from the mistakes of other social media sites like the recently hamstrung Parler. “All forms of racism, hate speech and abuse are prohibited on Clubhouse and are a direct violation of the Community Guidelines and Terms of Service. The company has trust and safety procedures in place to investigate and address any violation of these rules, which may include suspension or removal from the app.”

The best description of the app that I could find is also from NYT: “Clubhouse is a social media app where venture capitalists have gathered to mingle with one another while they are quarantined in their homes. The app is, for now, invite-only, and buzzy: Seemingly everyone who has been allowed to join the early test version, from celebrities like MC Hammer to activists like DeRay Mckesson, has tweeted about it.”

Users are spending as much as three or five hours on the site, virtually wandering in and out of audio chat rooms where they follow others’ conversations. And because Clubhouse caters to celebrities and other content creators, users report that the back and forth is always fascinating, comparing the app to a podcast with user participation.

Will Clubhouse continue to be successful? Who knows? Your smartphone’s delete file is full of social media sites you signed up for, played with for a little while, and then discarded like last week’s uneaten blueberries. Anyone still use their dormant Google+, Vine, Periscope, Friendster or MySpace accounts?

What matters is not whether Clubhouse will continue to rack up successes – no matter what happens next, the app has already created significant value for its early creators. The lesson for us is that there’s always another way to skin the cat, thread the camel through the eye of the needle, or otherwise get things done though innovation.

Rumor has it that back in 1899 the U.S. Commissioner of Patents, Charles H. Duell, declared that the patent office should be closed because everything that could be invented had been invented. Research suggests that Duell never actually said that, but the apocryphal urban myth is still instructive. Innovation continues to astonish us with new and novel ways of solving the same problems, pursuing the same opportunities, and otherwise changing the world by means we never could have imagined of before someone else figured it out and showed us.

By the way, if you want to see what MY next best idea is and how it can help you create yours, click HERE.