How To Recreate Your Career. 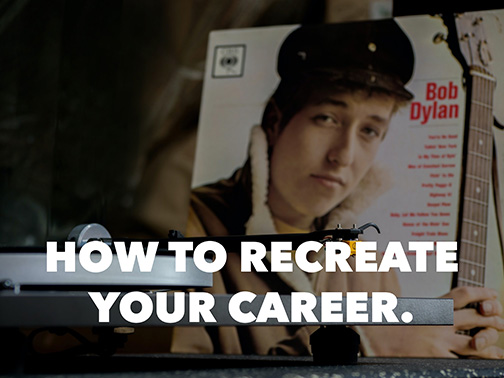 No other recording artist has done that.

Not one. Not even close.

Across his matchless career, Dylan wrote so many great songs that even his 15 bootleg albums (recordings of songs that didn’t make it on his official albums) add up to a bigger oeuvre than most successful recording artists would ever dream of producing.

Of all the verses, stanzas and couplets Dylan wrote in his more than 600 recorded songs, my favorite is the opening of Highway 61 Revisited on his album of the same name:

God said to Abraham, “Kill me a son.”

God say, “You can do what you want, Abe, but the next time you see me comin’, you better run.”

Well Abe say, “Where you want this killin’ done?”

Sound familiar? Of course you already know this story because the stanza refers to Genesis 22, in which God commands Abraham to kill his son Isaac. Dylan simply recast the conversation in the syncopated patois of a sixties hipster. His phrasing is so idiosyncratic that I highly recommend you listening to it again just to hear the way Dylan retells the story.

Yes, Dylan might be one of the most creative, influential, prolific, and awarded artists of the modern era but even he stands on the shoulders of giants.

Many of Dylan’s melodies were influenced by folk artists like Odetta and Pete Seger. His rambling image and his unique twang were cribbed from Woody Gutherie. His posturing was copied from blues artists including Leadbelly and Blind Willie McTell. And even his lyrics were inspired by sources as well-known as Jack Kerouac’s Desolation Angels and, as we’ve just seen, the Bible.

Besides my outsized respect for Dylan’s prowess, there’s another reason why I wanted to bring this to your attention. Because as you look to figure out how to move forward in the unprecedented world we all find ourselves in, remember that progress and success does not require you to reinvent the wheel and recreate yourself and your business as something so new that no one’s ever seen it before.

Instead of throwing the baby out with the bathwater, why not take a good look at what has come before and figure out how you can make simple changes and modifications to build something that works for you? It worked for Bob Dylan, why not you?

Have you heard about the new social media sensation Clubhouse yet? It’s simply an online audio interpretation of a conference or college seminar.

Bought or sold anything on Ebay or OfferUp? They’re just different combinations of a flea market or garage sale and the Internet.

When you look deeper, you’ll see that so many of the things we use and enjoy are really just creative reinterpretations of common concepts with which we are already quite familiar. And knowing that, you can more easily figure out what your next step should be. And learning from others’ successes should be a big part of your next success.

If you’d like help incorporating this bold new idea into your planning, consider joining my next Strategic Roundtable – Core Clarity. You’ll have the opportunity to work and build relationships with up to 11 other brilliant people who are all there to support you and your ideas while you help them too.

After all, Dylan created a masterpiece by reinterpreting biblical verse. Who knows what you can do?