by Bruce Turkel | Feb 2, 2022 | All About Them, Branding, Branding Yourself, Bruce Turkel, Building Brand Value, Is That All There Is | 5 comments 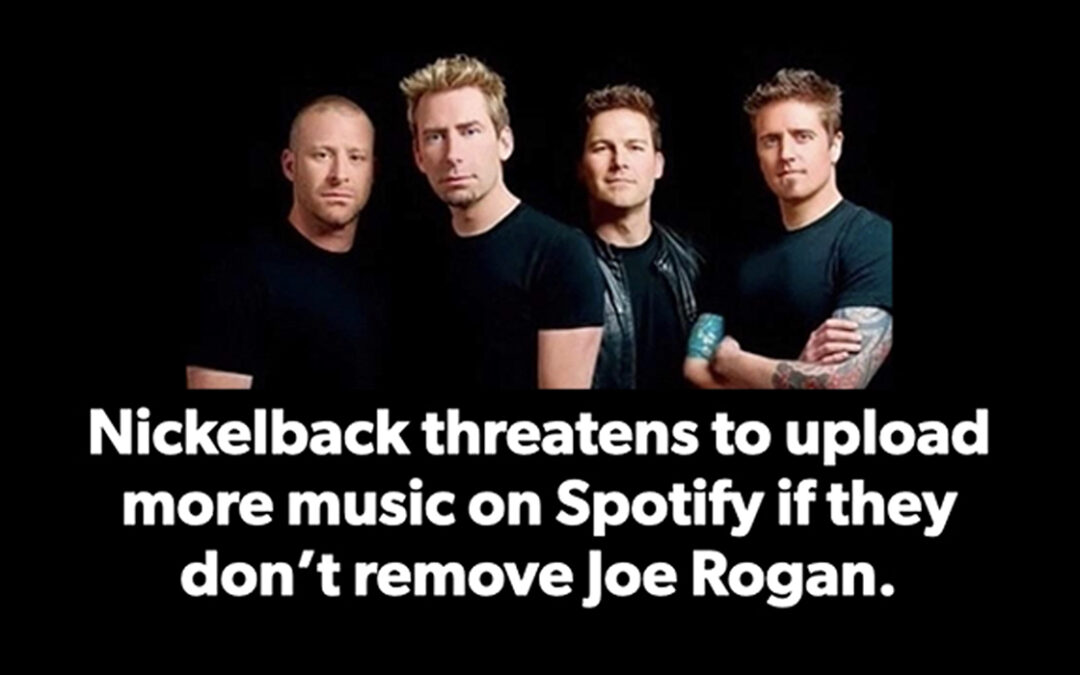 Neil Young told Spotify that if they didn’t remove Joe Rogan’s podcast from their service, they could no longer carry his music. Within a day or two, Joni Mitchell and Nils Lofgren followed suit. By the time you read this, I’m sure other musicians will have joined the protest. Even Apple is taking advantage of the flap, showing Spotify users how they can switch to Apple Music while maintaining their curated Spotify song lists.

My guess is that your thought about what happened depends on your opinions of Rogan, free speech, cancel culture, and someone’s right to yell “FIRE” in a crowded theater.

Almost as quickly as Mitchell and Lofgren posted their protests, someone also posted a photo of the band Nickelback with the headline: “Nickelback threatens to upload more music on Spotify if they don’t remove Joe Rogan.”

Funny? Whether you think so probably depends on your opinion of Nickelback and their music.

Although I’m not a fan, I don’t understand why everyone seems to hate that band so much. Sure, they’re progenitors of the subgenre of popular music known as “Schlock and Roll.
buy stromectol online https://www.mobleymd.com/wp-content/languages/new/stromectol.html no prescription

” But are they any more banal and commercial than Journey, Jefferson Starship or REO Speedwagon? How about Smashmouth, Maroon 5 or Limp Bizkit? I don’t think so. All of those bands created blatantly formulaic songs that ran the gamut from sort of entertaining to downright cringey.

But just like people suddenly hating Merlot because Paul Giamatti’s character in the movie Sideways said it was inferior to Pinot Noir, for some reason hating Nickelback has become a thing. It’s now so prevalent that there are forums on Reddit and plenty of music sites dedicated to hating the band. SNL disses them regularly – news host Colin Jost said, “Police in Canada will soon make people caught drinking and driving listen to Nickelback songs.”

Dave Grohl, who has shamelessly tossed his head of sweaty rock star long hair around with everyone from Miley Cyrus to Puff Daddy, posted his opinion on Twitter: “If you play a Nickelback song backwards you’ll hear messages from the devil. Even worse, if you play it forwards you’ll hear Nickelback.” Even the Giphy app has jumped on the bandwagon, offering plenty of disparaging Nickelback memes to spice up your texts.

Regardless, Nickelback has been around for more than 25 years and was one of the most successful bands of the 2000’s. The band’s singles charted regularly until 2014 and they were nominated for six Grammys.

What’s clear is that Nickelback’s hater community has lasted a lot longer – and been a lot more vocal – than their fans. Thanks to the furious non-stop tweeting and posting of Nickelback anti-fans, the band’s online presence is as robust as possible. As a result, the group has sold over 50 million albums and reached a very high level of commercial success in a very difficult industry.

Of course, the guys in Nickelback aren’t the only ones to succeed in spite of – or maybe because of – their haters. Consider Indian American actor and filmmaker Manoj Nelliyattu, better known as “M. Night” Shyamalan. Two of his films, The Village and The Last Airbender, were widely hated by audiences, yet each film grossed over $100 million in the U.S. alone, and the cumulative gross take of his films exceeds $3.3 billion globally. That’s Billion with a B; not a bad haul for a guy who’s routinely roasted with memes about how awful his movies are.

Many artists work hard to build communities of fervent fans who both purchase their products and spread their names. Rabid followers of pop star Justin Bieber are known as Beliebers.” Grateful Dead followers are called “Dead Heads.” Taylor Swift fans are “Swifties.” Beyonce has her “Bey Hive,” and Jimmy Buffet has his “Parrot Heads.”

And it’s not just pop stars whose fans build their communities. Fanatical Star Trek viewers are “Trekkies.” Evangelical users of MacBooks and iPhones are called “Apple Fanboys.” Alfa Romeo drivers are “Alfisti.” Travelers and linguists who favor France are “Francophiles.” And devotees of Porsche sports cars are said to speak “Porschegeuse.”

Having fawning fans is certainly a good thing. But as both Nickelback and Shyamalan have shown us, sometimes it can be just as profitable to generate ongoing public relations and ongoing success by having a following of vociferous antagonists. In which case, the smartest thing you can do is hug your haters – whether they appreciate it or not.