I Want to be Dorie Clark. 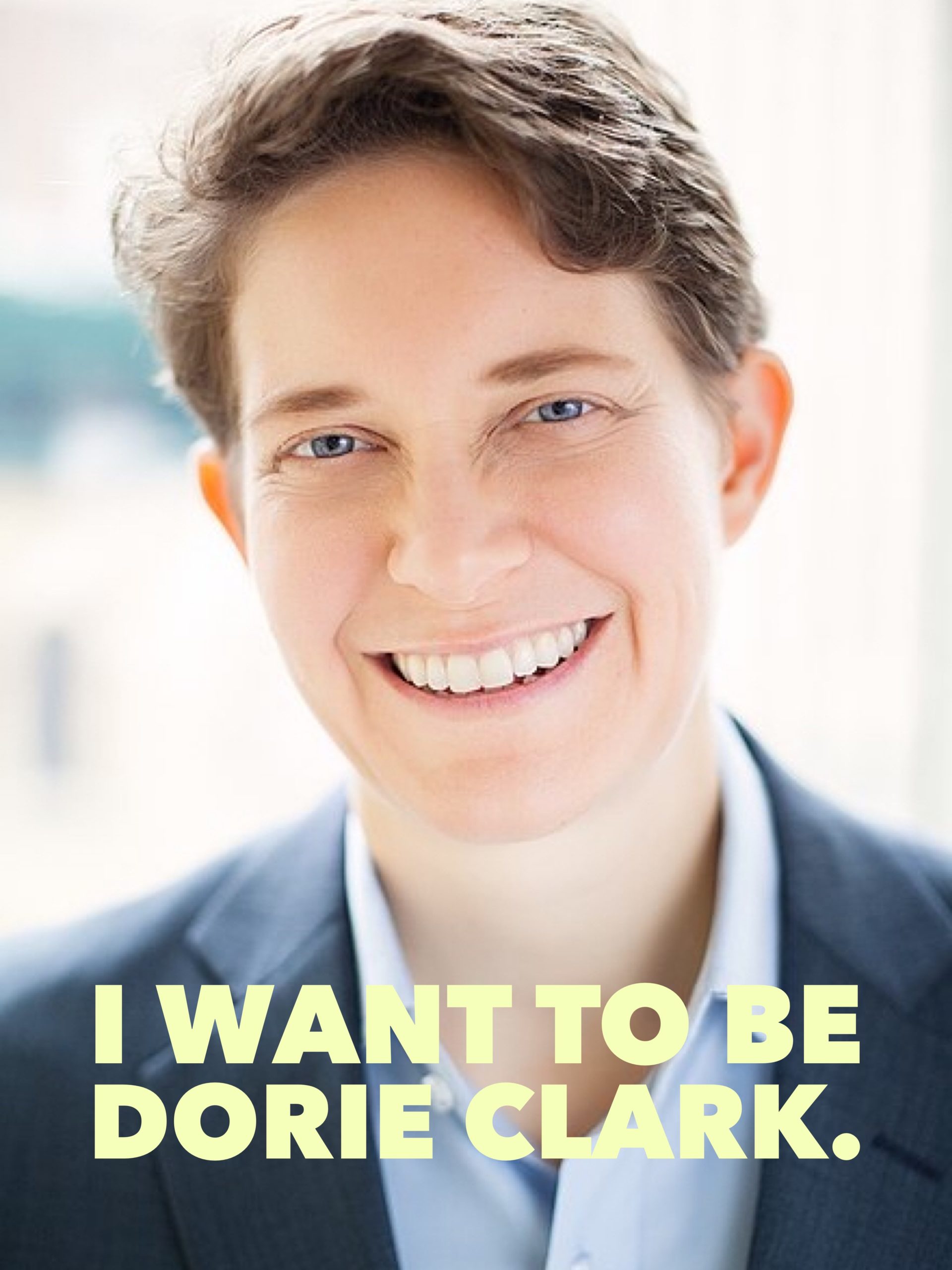 Dorie Clark is my idol. Dorie is who I want to be when I grow up.

There. I said it. Now you know the truth.

Want to see who I’ll be twenty years from now? Just check out Dorie today.

No no no, don’t bother your head with pesky little discrepancies such as the fact that Dorie is younger than me. Or that Dorie has a Master of Theological Studies from Harvard Divinity School and I have a design degree from the University of Florida. Or that Dorie is an executive education professor at Duke University’s Fuqua School of Business and I’m not.

None of those roadblocks will dissuade me from my destiny. I have seen my future and it is Dorie.

Why am I so enamored of my friend and everything she’s accomplished? Because Dorie is the living embodiment of my belief that people don’t choose what you do, they chose who you are.

What does Dorie actually do? Here is just a small list copied and pasted directly from Wikipedia:﻿

“Dorie Clark has guest-lectured and taught at universities around the world, including Harvard University in Cambridge, Massachusetts; IE Business School in Madrid, Spain; and the Moscow School of Management SKOLKOVO in Moscow, Russia. She has also spoken at the U.S. Library of Congress.

Clark has been described by the New York Times as an “expert at self-reinvention and helping others make changes in their lives.” She is a frequent contributor to the Harvard Business Review, Fast Company, andBusiness Insider. She hosts “Better,” a weekly video interview program, for Newsweek.”

Did I mention that Dorie was the press secretary for former U.S. Labor Secretary Robert Reich’s campaign for Massachusetts governor or the New Hampshire Communication Director for Howard Dean’s 2004 presidential campaign?

I could go on and on but I think I’ve made my point. If you look up the word “Awesome” in the dictionary, you’ll find Dorie Clark’s photo.

Here’s the thing – when I embarked on my new life mission of understanding why people change their lives and what I can do to help them succeed and thrive in the brave new world we’re all living in; I knew that I had a lot to learn from Dorie. So I e-mailed her a list of how-to questions longer than Amanda Gorman’s roster of new Twitter followers.

Because Dorie’s such a generous friend, she wrote back that she’d be delighted to answer my questions. But because she’s also an astonishingly good marketer, Dorie suggested we host our conversation on LinkedIn as a live event and make it open to anyone who might be interested in listening in.

And that’s where you come in. If you’d like to join me and listen to Dorie, just tune in to our LinkedIn Live conversation (Wednesday, February 3, 2021) at 3 PM, EST. All you have to do is click HERE at 3 PM to join in on the conversation (at another time the link will just take you to a list of Dorie’s recent LinkedIn posts). After we’re done, you’ll probably want to click HERE to post your comments and to thank me for inviting you to participate in such a great event.

I promise you that our time with Dorie Clark will be an hour very well spent.