Is Your Purpose To Buy Less and Spend More?

by Bruce Turkel | May 25, 2021 | Advertising, All About Them, Branding, Branding Yourself, Bruce Turkel, Building Brand Value, Coronavirus, Crisis Management, Your Purpose | 3 comments 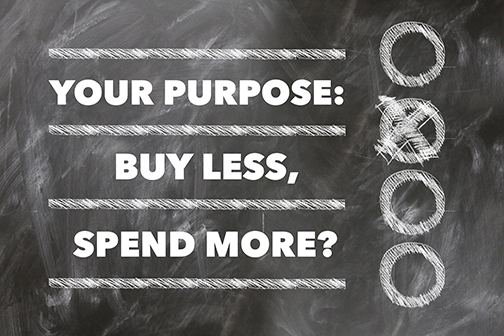 According to Kerryn Higgs’ book, “Collision Course: Endless Growth on a Finite Planet”, the notion of humans as consumers first took shape before World War I, but became commonplace in America in the 1920s. For many, consumption is now seen as our principal purpose in the world. Thanks to that, terms such as “consumer price index” and “consumer confidence” are often used to explain economic trends and guide government programs.

In Land of Desire: Merchants, Power, and the Rise of a New American Culture, historian William Leach wrote “the cardinal features of our culture were acquisition and consumption as the means of achieving happiness; the cult of the new; the democratization of desire; and money value as the predominant measure of all value in society.”

This notion of our purpose has become so powerful that across the 20th century capitalism reconfigured the ordinary person into a super consumer with an insatiable desire for more and more things.

Of course none of us want to admit that we’re running on this same treadmill. But deep inside most of us know our own consumerism is a large part of our purpose, self-image, and self-worth.

Bigger Faster Better could be the headline for a brand new truck, a new pair of Nike running shoes, the new gym opening around the corner or even our hope for ourselves and our careers.

Run Faster. Jump Higher could be the tagline for a new pair of Keds, a new nutritional supplement or our hope for ourselves and our careers.

And More More More could easily sum up our collective desire for:

D. All of the above.

And marketers, long used to profiting by promising us all these superlatives now see a great opportunity to profit by offering just the opposite – the opportunity for us to slim down, lighten our loads, and reduce our consumer footprint.

Buy more books and workshops: Maria Kondo has made a fortune showing people how to tidy up and have less.

Buy more clothes and beauty products: Gwyneth Paltrow’s Goop promises its customers that they can buy less because “we think it’s possible to build a great wardrobe from a handful of beautifully made essentials.” And all this while you’re shopping for a $525 Apron Dress, a $145 Organic Cotton Short-Sleeve Crewneck T-Shirt or a $45 Face Covering (fabric mask).

More to that point, new industries have sprung up to help people who believe they are tired of buying things buy more things. Especially things that are even more expensive than the things they already have.

When questioned about this trend, celebrated auctioneer Aurel Bacs told Departures Magazine, “People realize that anything average, if they don’t buy today, they can buy next month. But the rarest, best preserved, most original watches have benefitted.”

After all, anyone with money can walk into a jewelry store and buy a shiny new Rolex. But it takes effort to put on a vintage timepiece and show the world you’re fed up with consumerism.

This is true for classic sports cars, antique musical instruments, and even vintage blue jeans.

The ability to convince people that their purpose is to buy less while they’re spending more seems like another clever reframing of consumer desires created specifically to increase consumerism.

Even if your goal is exactly the opposite.