The Convenience of Convenient Speech.

by Bruce Turkel | Apr 19, 2021 | All About Them, Branding, Branding Yourself, Building Brand Value, IS That All There Is?, Leadership, Marketing | 8 comments 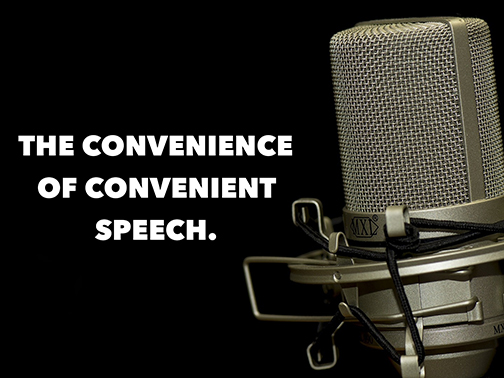 The science fiction writer Isaac Asimov said, “What is mind? No matter. What is matter? Never mind.”

What does that mean?

Beats the heck out of me. I’ve read it over and over and still don’t understand what Asimov was trying to say. But I will agree that it’s a clever use of word construction and sentence structure.

On the same subject, we were just finishing up our run the other day and my running buddy was talking about his son’s cross-country team.

My buddy said he likes cross-country because it’s a sport where you can really prove what you’re capable of doing. There are no defensive players trying to stop you; it’s just you against the course. He also told me he liked the coach who had told the team, “If today you do what others won’t, tomorrow you’ll do what others can’t.”

I nodded, tacitly agreeing that the coach’s words made good sense.

But it got me to thinking – how many sayings do we listen to, accept, and maybe even follow just because they sound good? Are we guiding our lives on words that appeal to us simply because they’re grammatically convenient?

After all, as good as that saying sounds, it doesn’t take talent, physical attributes, or any considerations into mind. It simply says that if you work hard you’ll accomplish things that others won’t.

But the truth is that you might and you might not. Commitment is not the only thing that assures success. We know plenty of hard workers who have not accomplished what they set out to do, regardless of the effort they made.

“I used to be sad because I had no shoes, until I met a man who had no feet.”

Huh? What did you just say? Do we really believe this stuff or does it just trip off our tongues so lightly that we buy it without a second thought?

Maybe we shouldn’t be so easily disarmed by these simple sayings. Treacly aphorisms don’t just burrow their way into our brains and hang on the walls in sales directors’ cubicles. They can also change the world.

FDR buoyed a country devastated by the depression when he assured Americans that the “only thing we have to fear is fear itself.” JFK ushered in at least a decade of public service when he said, “Ask not what your country can do for you – ask what you can do for your country.”

More recently Barack Obama sold what can arguably be considered the largest consumer product in the world, the presidency of the United States of America, with the uplifting cheer “Yes We Can.”  And then Donald Trump took over with the words “Make America Great Again.”

In our over-stimulated, over-caffeinated, over-connected world, well-crafted clichés become the stenographers’ shorthand of clever communicators. And just like checking a new car’s quality by kicking its tires, these sayings often provide a comforting and expedient, if irrelevant, benchmark.

After all, if opposites attract, then why would birds of a feather flock together? If absence makes the heart grow fonder, then why is out of sight, out of mind?

Why? Because the words sound good together, that’s why.