The Enormous Value of First Principles

by Bruce Turkel | Jan 26, 2021 | All About Them, Branding, Branding Yourself, Bruce Turkel, Building Brand Value, IS That All There Is? | 6 comments 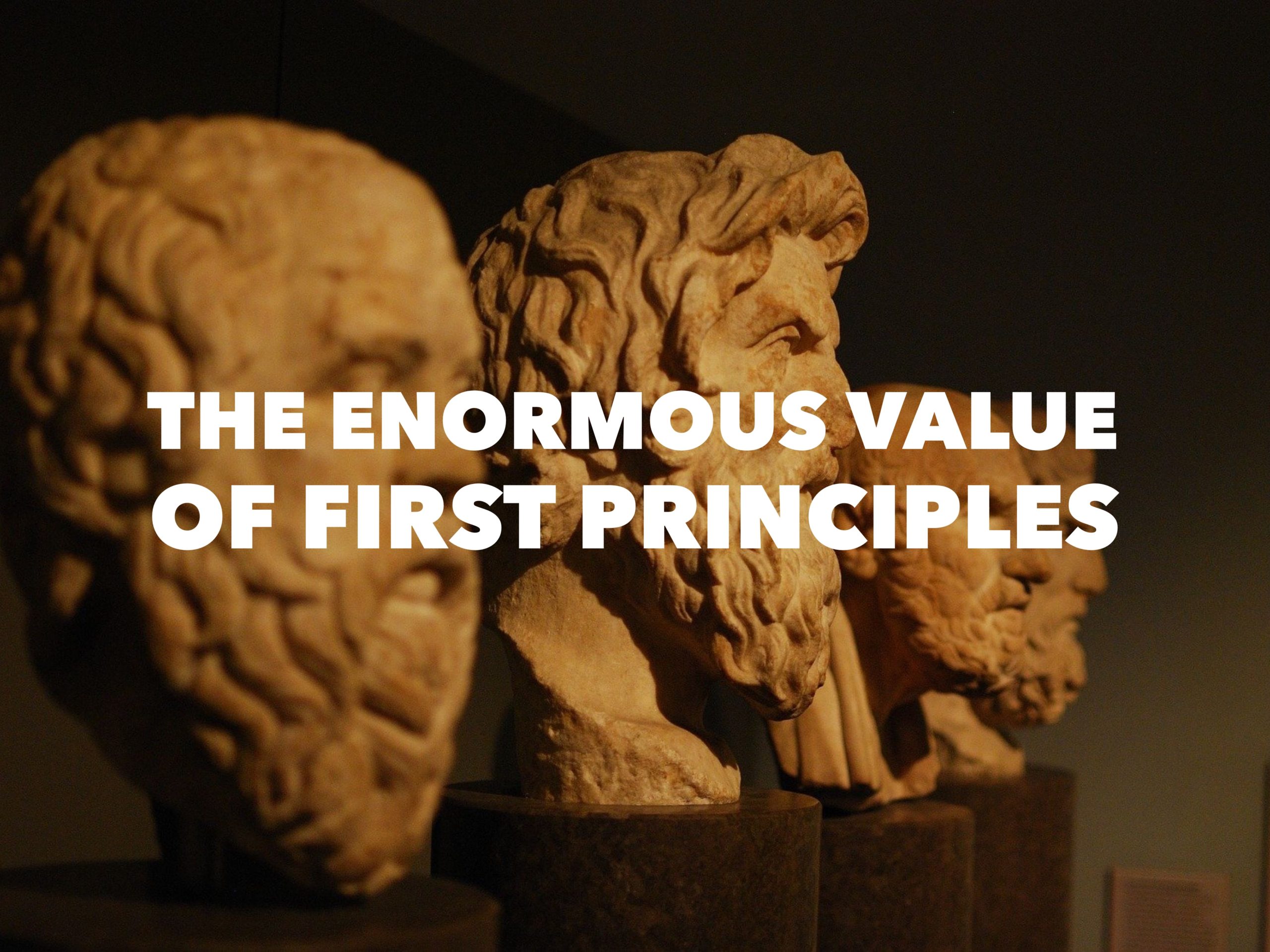 I was trying to help someone understand how to use their email system. If you’ve ever been an informal IT coach, you know how frustrating it can be. That’s because it’s so hard to know how much someone else understands and therefore it’s also difficult to know when you’re being helpful, when you’re being too remedial, and when you’re talking over your student’s head.

Kind of like learning a new language or a new musical instrument as an adult. How do you separate beginners from intermediate or advanced students? Where do you draw the line?

In the case of the email program, I realized the reason I was having trouble was that while my friend understood how to do most of the things they regularly did on their computer, they didn’t have any idea of how the computer actually worked. That meant that any time they ran up against something calling for a bit of insight or a skill set beyond their level of comprehension, they didn’t have the foundational background to solve their problem.

I likened that problem to learning how to read by words instead of letters.

If you learned to read that way, and you had learned the words “cat,” “hat,” “that,” “is,” and “in,” then you’d have no problem reading the sentences “That cat is in that hat” or “Is that cat in that hat?”

But change the subject to a new word such as “rat” and you wouldn’t be able to understand a new sentence that read “That rat is in that hat” because you couldn’t read the word “rat.”

Of course if you knew the letters that make up the words themselves it would be relatively easy to change the c-sound of “cat” for the r-sound of “rat” and figure out what you were looking at.

By the same token, if you don’t understand the difference between your computer’s operating system and the application you’re using, or that WiFi and Internet signals depend on each other but are not the same thing, it’s hard to know what to do when something slightly different was happening on your computer that was causing a problem.

What I’ve since learned is that this concept of understanding fundamentals in order to better understand the greater whole is called “First Principles.”

As he developed his ideas, he went on to define defining First Principles as “the first basis from which a thing is known.”

Based on what you know a lot about, you can find First Principles in the fundamentals that make up your knowledge. Whether you’re a chef, a musician, a chemist, an accountant, an attorney, a physician, a mechanic, an engineer, or any other craftsperson, artisan or professional, the reason you excel at what you do is your rock solid understanding of your area’s First Principles. Your ability to adapt and riff on what you know to create new constructs and solutions comes from this basic understanding.

An easy and practical way to use your First Principles to make decisions is to use the Socratic method of continually asking why (less formally known as “peeling back the onion”) until you get to the core answer that explains why a situation works the way it does. That way you can eliminate assumptions and presuppositions and craft your solutions or your responses based on the real fundamentals of what is truly possible.

We frequently look to complicated solutions or technique to demonstrate virtuosity. But based on the concept of First Principles, it’s often a mastery of the basics that can lead to exceptional results.