What would you do if you weren’t doing what you’re doing?

by Bruce Turkel | Jun 22, 2021 | All About Them, Branding, Branding Yourself, Bruce Turkel, IS That All There Is?, Leadership, Your Purpose | 1 comment 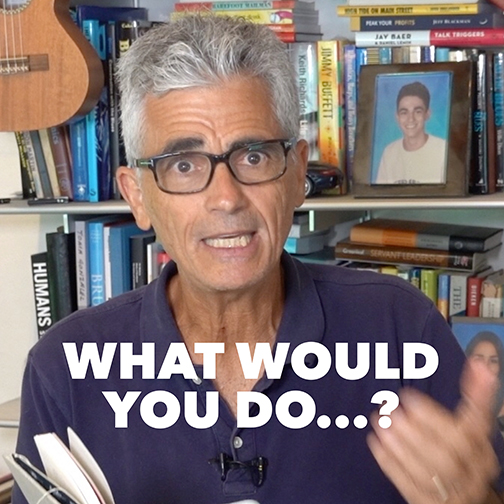 What would you do if you weren’t doing what you’re doing?

And what would it take for you to do whatever it is that you’d rather be doing?

I was working with someone in one of my Strategic Roundtables and I asked her these two simple questions.

She was completely flummoxed.

“What do you mean what would I be doing?” she asked. “I’m doing what I love doing. Why would I do anything else?”

“Well… yeah,” she said. “I mean… yeah, if I could take care of THOSE things then I’d really love what I do.”

“So what would you be doing if you weren’t doing what you’re doing?” I asked again. “And what would it take for you to do whatever it is that you’d rather be doing?”

She still didn’t get it and pushed back:

“And anyways,” she added indignantly, “what else COULD I do?”

How often have you asked yourself that very same question? What would YOU be doing if you weren’t doing what you’re doing? And, if there is something else that you’d rather be doing, what would it take for you to be able to do that?

The late creative director of Hallmark Cards, Gordon McKenzie, wrote a wonderful book titled Orbiting the Giant Hairball. I remember it had a big impact on me when I read it years ago and I remembered it again when I was writing this blog. So I rummaged through my bookshelf to find McKenzie’s book and paged through it until I found one of my favorite passages:

“Sky diving without a parachute is suicide.

And: Holing up in a closet is vegetating.

Generally, though… if you want to live more fully, start somewhere toward the safe end of the security/freedom continuum, and move mindfully, ever so mindfully, toward the free end.”

In this light, perhaps my question wasn’t as helpful as it could have been. Maybe instead of asking, “what would it take for you to do whatever it is that you’d rather be doing?” I should have asked, “what would it take for you to start moving towards doing whatever it is you’d rather be doing?” In other words, maybe I should have tempered the challenging question with the soothing salve of moving “ever so mindfully” and not having to quit your day job.

According to McKenzie, the proper answer lies somewhere between “the ridiculous extremes of vegetating and suicide,” based on who we are, where we are, and what we want during the “different times… and different parts of our lives.”

Because despite the difficulties of achieving something new, wondering what you’d rather be doing and thinking about how you can make that happen is an idea worth thinking about. Even if achieving your solution may take a little longer – or take a little more work – than you might like.
So let me ask you again: What would you do if you weren’t doing what you’re doing?