Coronavirus and the Tyranny of Seamlessness.

by Bruce Turkel | May 6, 2020 | All About Them, Branding Yourself, Building Brand Value, Crisis Management | 5 comments 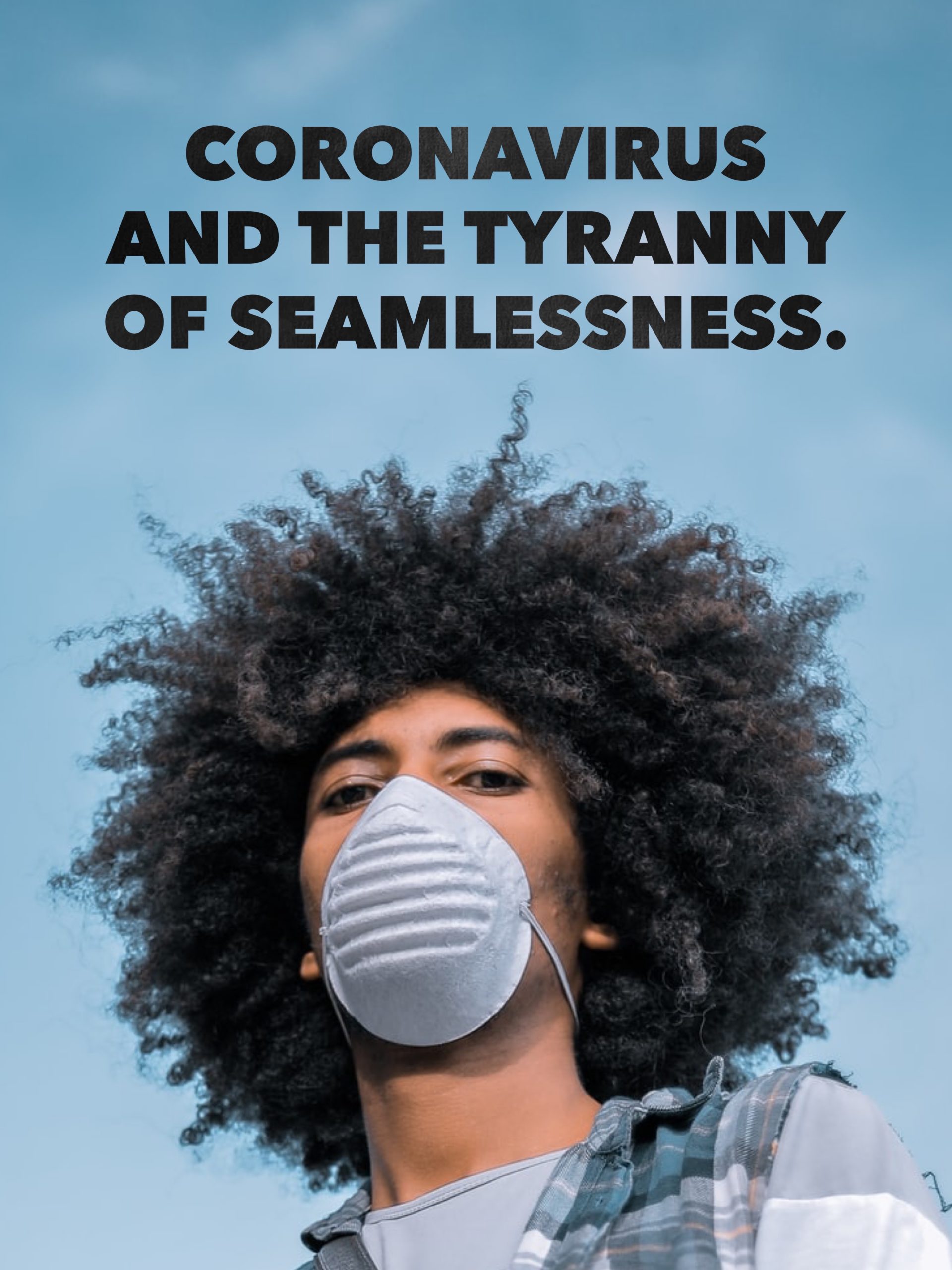 Coronavirus and the Tyranny of Seamlessness.

Ironically enough, one of the most important aspects to shooting good video is the audio. I’ve learned that viewers will put up with fuzzy shots or shaky images, but if the sound is bad or hard to hear, they’ll sign off almost immediately.

Because of that, I’m always fretting about how to get the best sound on my Marketing Minute videos. I’m constantly experimenting with new microphones to hear which one works best. And because like cameras, the best microphone is always the one you happen to have with you when you need it. So I always try to carry one of my mics with me. Depending on where I’m going, I choose from a wired lapel mic, a big unidirectional mic with a big fuzzy windscreen, or my favorite, a little Bluetooth mic called “Hey Mic!”

But sometimes I’ll be out somewhere and come up with the perfect Marketing Minute idea when I don’t have a mic with me at all. Then I have to settle for Apple’s white earbuds to make sure the video sounds as good as possible. I’m always concerned that the white lumps of plastic in my ears, and the white wires running down the side of my face, will be distracting.

But you know what? No one seems to care.

Nobody has ever commented or criticized the un-professionalism of that approach. Some people criticize with what I have to say, and they disagree with my conclusions, but they never mention the wires.

When I was in high school, our marching band played the Star Spangled Banner at Disney World, right smack in the middle of the Magic Kingdom. But when we first got to the park we didn’t lug our instruments down Main Street. Instead, when we got out of the busses we were hustled into a tunnel and walked under the Magic Kingdom all the way to Cinderella’s Castle. That’s where we magically appeared right in front of the audience we entertained.

Everything above the ground was seamless and perfect in Disney’s special way. But underneath the park, the Magic Kingdom was just a little less magic. We saw the people who played the Disney characters on their breaks. They took off their giant cartoon heads to better slurp sodas and smoke cigarettes (this was the Seventies, by the way).

We saw seamstresses repairing costumes and electricians fixing wiring. And we saw the sanitation workers lugging bins and bins of garbage out to the giant dumpsters hidden in the back.

We saw all this because we were “working” there. But the paying guests saw none of it. They just enjoyed a seamless experience where everything was impossibly perfect.

Think about the things you used to do that are just about impossible now:

Maybe your scrupulously touched up roots are peeking through in all their gray glory.

Perhaps your regularly trimmed hair is now unruly and shaggy (I know mine is).

Maybe online home schooling is a little less educational and a little more raucous than you expected. Maybe you’re tired of beans and rice for the fourth night in a row.

Like the teeming tunnels under Disney World, or the white wires peeking out of my ears on my Marketing Minutes, sometimes seamlessness just isn’t possible.

You’ll see that on Saturday Night Live’s home broadcasts. You’ll see that when you watch your favorite musician host an online concert.  You’ll experience that when your home delivery grocery service brings the wrong things or your “next day” Amazon delivery takes a few more days than usual.

That doesn’t mean that the experience or the content of what you’re doing isn’t valuable. It just means that perhaps it’s a little too hard to keep everything as perfect as usual.

For years I’ve said that “people don’t choose what you do, they choose who you are.” Today’s new normal is proving that to be truer than ever. If you’re truly sharing your knowledge and talents and a bit of who you are, your shaggy gray locks or small faux pas are just a little more of who you are. And in a time when people are desperate for certainty, the certainty of who you are is exactly what your audience wants and appreciates.