What’s the Big Deal About Creativity?

A few years ago, I visited Graceland, Elvis Presley’s home in Memphis. After oohing and ahhing in the Jungle Room and checking out Elvis’ cars and airplanes, we walked through the museum.

Behind the glass was a huge collection of Elvis memorabilia; Guitars, motorcycles, posters, and mannequins dressed in his various stage and movie costumes.

There was a highway patrolman outfit, army fatigues, a cowboy getup, a construction worker’s jeans and blue denim shirt, the suede breeches and vest of a native American chieftain, a biker’s black leather jacket and chaps, and more.

And that’s when it hit me! The six guys in the disco band The Village People must have been wandering through Elvis’ Graceland museum when they got the idea for their distinctive look. Elvis had already assembled all the costumes for them. All they had to do was put them on and start their storytelling.

Their looks weren’t new. The Village People just put them together in new ways.

Everyone makes such a big deal about creativity. But maybe it’s just this simple. 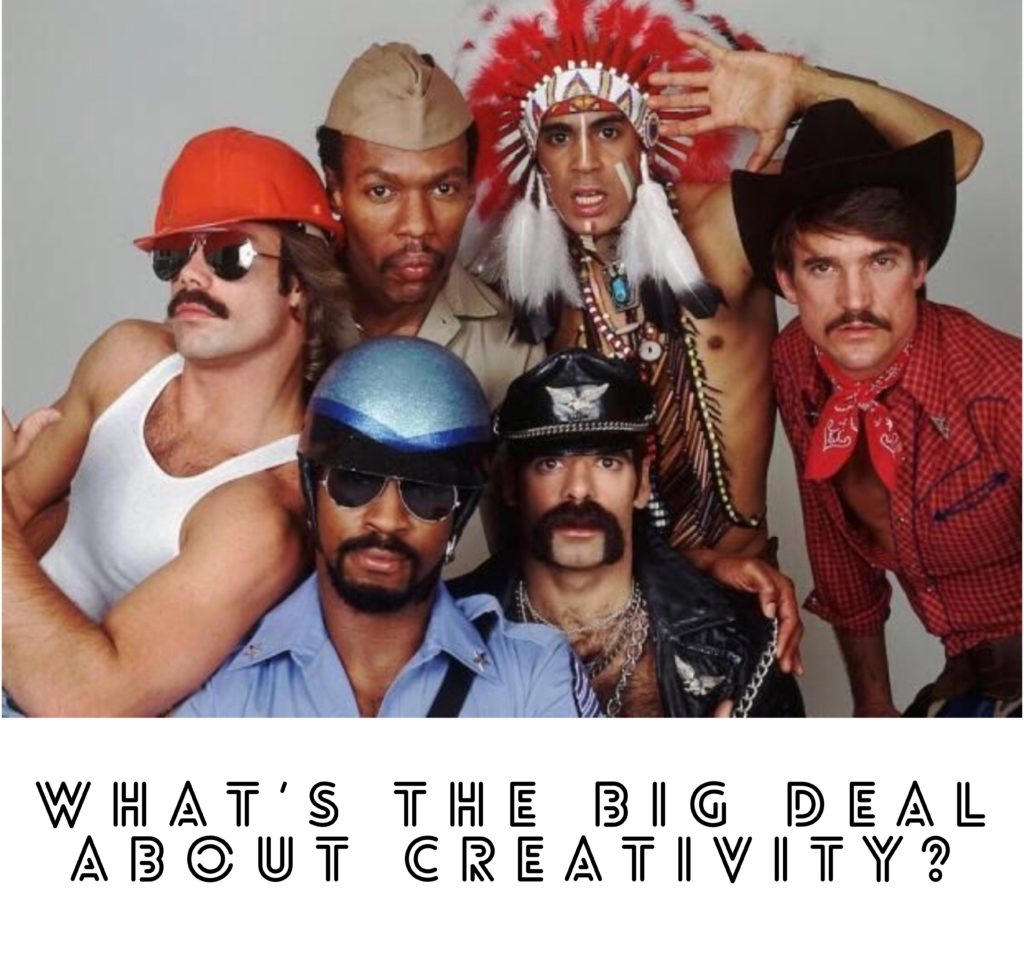 Steve Jobs Got It Right

Deepak Chopra said, “The domain of awareness (is) where we experience values like…intuition, creativity, insight and focused attention.”

And Donatella Versace said, “Creativity comes from a conflict of ideas.”

I think Jobs got it right. The way I see it, using creativity to build your brand story is simply a matter of putting old things together in new ways. Just like the Village People did.

Based on this simplified understanding of creativity, couldn’t you have thought of some of our most recent business phenoms?

Facebook? Facebook is just the online version of those slam books we all passed around in junior high school. We’d fold back the pages and scribble in who we liked, whom we wanted to kiss, and who our friends were. The only thing missing was the Internet. And emojis.

And Google? The original company was just a digital version of Mrs. Kradish, my elementary school librarian, who knew where absolutely everything was kept on every shelf in the library.

Maybe I’m thinking too big. Maybe the idea of creating the next Facebook, eBay or Google is too daunting. In that case, what can you combine in your life that can change the outcome just enough that people will take notice? Like the “Mustgo” stew that my friend Pamela makes from whatever’s been sitting in her refrigerator for too long, combining old ingredients in new ways can often create wonderful new inventions and appealing new flavors that people haven’t enjoyed before.

Good ideas are just like the stuff sitting in your fridge. We’ve all got them, but few of us have the time, vision, resources or plain old gumption to mix them in new ways and see them through to fruition. And all too often, even though the great idea is kicking us in the shins, we don’t look down long enough to see it. Or as Marshall McLuhan wrote, “I don’t know who discovered water, but it certainly wasn’t a fish.”

Technology has flattened the playing field, democratized distribution, and created room for every single great new idea you can think of. If there’s something you want or need, chances are others want it too. And like planting an oak tree, the best time to create your new idea is 20 years ago.

If you want to find out more about how to build your brand and your brand story, make sure to get my latest book – All About Them.